Last night, my father was felicitated as a real-life hero by one of the biggest stars in the world on a national television show – my personal journey to seeing him as a hero took forty years. 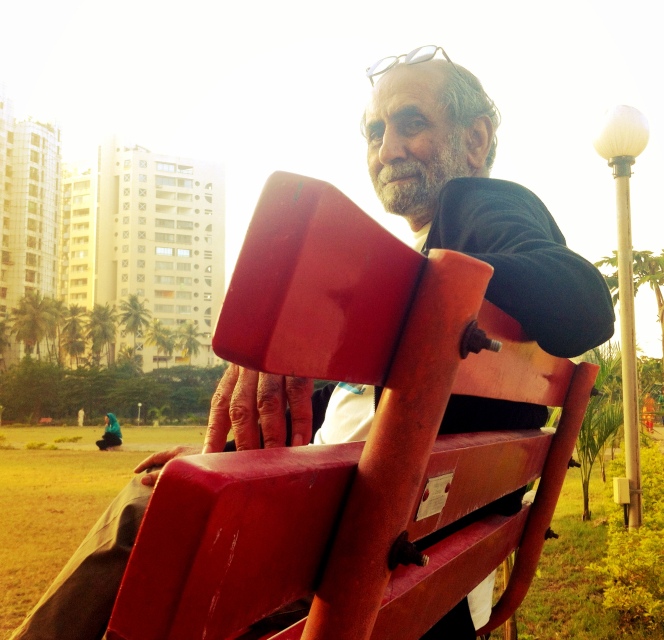 Last year, my father visited my therapist brother GD for a healing session for the first time, almost 15 years after GD began healing. The healing session had been powerful and by the end, dad had fallen into deep meditation. He looked at ease with himself, his eyes steady and chronic cough silent.

As we drove back at night to Mumbai together, expressway lights swishing past the corner of our eyes, we talked more than we had talked all year. And we talked about real things – not things to fill the silence. He remembered the incident when GD, as a toddler, had fallen from a mid-ocean pontoon — how he had miraculously survived certain death. And how, as a teenager, GD had meditated so long he damaged a nerve in his leg for years. He spoke of how he had been incensed with GD as a twenty-something who ate, slept and meditated all day while he worked. And about how my mother cried for months after GD left for Pune to live with his spiritual teacher and stopped phoning home. But most of all, he spoke about how proud he was of both of us today.

Two decades ago, in a family of modest means, a grown-up son’s decision to devote his life to spirituality had real financial implications. And while dad did not ever say a word to stop GD, some part inside had remained raw and sensitive. And until this session he had not allowed himself to fully take support from GD.

I quietly told dad that GD and I often speak of him as a rare father, who gave us freedom and yet supported us. Who did things for us he did not agree with, but maintained his integrity. Who did not shame us because we were not following what he thought was the right path.

Talking to him, I realized how little we know even about those closest to us, because we never talk beyond immediate, daily problems and information. How hurts can lie unexpressed within for years, until distances grow into long empty highways. But most of all, I realized how few words it takes to express appreciation that can be missed for decades.

As I helped dad unload his luggage at the end of our journey under a pool of halogen streetlight, I knew it was not just his healing that had happened today — a circle had been completed and a deep healing had happened for all three of us.

I share this with the hope that you take some time out to rediscover your own parents. To hear their stories, and their versions of your stories. And to thank them for the way their lives arced to make space for yours. Watch them paint images of your life that you didn’t see before. And you show them their own beauty in a new light. So often, under the inertia of mundanity, it is the important ‘I-love-you’, the ‘please-forgive-me’, the ‘sorry’ and the ‘thank you’ that remains unexpressed until it’s too late.

My son is at an age when he creates the rules of whatever games he plays. And still gets that the point of every game is to have fun. So if he dashes into a wall in an online game, he claps with glee. Collecting the maximum widgets doesn’t make sense to him yet. He is just as happy prancing around aimlessly.

As he grows up, he will be taught that every game has a purpose. And rules. And only one correct end goal. He will feel sad when he doesn’t reach that end. And frustrated when he feels he’s not good enough. He will get stressed playing the same game. He may begin to feel that if he hasn’t completed or mastered something, it was a waste of time.

Gradually, as he becomes an adult, he will completely forget that the rules came afterwards. Not just in his play – which will become serious and competitive – but in life too. He will forget that the bottomline of the game of life, too, is to have fun. He will believe that collecting the maximum widgets called ‘money’ is the only correct point of this game.

He will buy into the rules: that you can only be happy once you can be described as successful or rich or have a perfect body; or that you can’t live ecstatically until you find the perfect partner or perfect enlightenment. He may add rules, limitations and conclusions around his creativity that don’t allow him to be spontaneous and original. He may even lock himself down with judgments about what he can wear, what he can eat and how he should live in order to not ‘fail’ at life.

But maybe, someday, his own child will come running, squealing with joy towards him across the grass… and tumble. And then laugh with wild joy and do it again because falling is so much fun! And hopefully, that day, my son will remember that it is only a grown-up rule that falling down is bad.

And, in fact, that rules in life are actually arbitrary. The solid realities that bind us are enforced by thoughts and concepts that we have breathed life into. He will realize he can still choose any rule… but he doesn’t have to! And he may join his son in laughing because he will instantly feel freer than he has felt in many years. He will have fun once again in that moment when he is playing the game like he did as a child — without someone else’s rules.

Artwork by Aalif Surti is licensed under a Creative Commons Attribution-NonCommercial 3.0 Unported License.
Permissions beyond the scope of this license may be available at aalifs@gmail.com.